Wichita Force running back Mikhail Lindsay set a single game high for touchdowns on Saturday night, scoring four, but that was not enough to help his team prevail over the Sioux City Bandits, who came away with a 49-27 victory. Dillon Turner threw for two touchdowns and ran for two more for the Bandits. The loss was the fourth in a row for Wichita (2-8).

The Wichita Force entered Saturday night’s contest looking to get off to a better start than they had in their previous two contests. That did not prove to be the case, as the Omaha Beef produced touchdowns on each of their first three drives on their way to a 70-33 victory. Quarterback Derrick Bernard threw for six touchdowns to lead the Beef and the Omaha defense generated four turnovers. Emmanuel Young tossed two touchdown passes for Wichita. 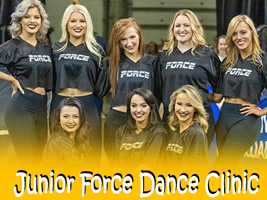 Come be a Junior Force Dancer! The Lady Force Dance team invites ages 3 to 15 to come dance at their annual dance clinic on June 15 from 11 a.m. to 1 p.m. inside INTRUST Bank Arena. The Junior Force Dancers will perform the routine they learn at the clinic at halftime of the Wichita Force Football game on June 15 (game begins at 7:05 p.m.).

The Wichita Force have been a second half team all season, but the tables were turned on them Friday night, as the Duke City Gladiators blew open a close contest, outscoring the Force by 33 in the final half on their way to a 64-22 victory. Gladiators quarterbacks threw for 6 touchdowns while the defense intercepted three passes and allowed Wichita just 87 yards of total offense.

Turner Too Much for Force as Bandits Dominate, 70-30

The Wichita Force headed back to the road following their 27 point victory over the Oklahoma Flying Aces last Saturday, travelling to Sioux City to take on the Bandits as they looked for their second win in a row. However, quarterback Dillon Turner could not be stopped, as he threw for five touchdowns and ran for another in the 70-30 Sioux City victory. That spoiled Mikhail Lindsay’s biggest game of the year, as he rushed for 76 yards and a touchdown.

The Wichita Force finally returned home after a three-game road trip that saw the team drop all three contests. They were in need of something to get them back into the playoff chase in the North Division and, thanks to three touchdowns by Jack Tomlinson and a smothering defense, the Force downed the Oklahoma Flying Aces, 61-34. The 61 points was a season high for Wichita.

The Wichita Force held the Salina Liberty to 50 points on Saturday night, their lowest single game point total of the season, but it was not enough to earn the victory as Tracy Brooks scored four touchdowns to lead Salina to the 50-22 victory. Brooks finished with 151 yards from scrimmage and the Salina defense held Wichita to 192 total yards of offense.

Kent, Revolution Too Much for Improved Force

It was the home opener for the Wichita Force, coming off a season opening loss to the defending champion Duke City Gladiators. The Force looked greatly improved in every facet of the game, but were no match for Robert Kent, Jr. and the Texas Revolution, who pulled out a 47-37 victory.

There was no doubt entering the 2019 Champions Indoor Football League that the defending champion Duke City Gladiators had a really good defense. They were ranked first heading into the season, and that was clearly on display on Saturday as the Gladiators squad held the Wichita Force to just three points through the first three quarters on their way to a 76-24 victory. Force quarterback Joe Hubener struggled early on, but finished with 191 yards passing and 2 touchdowns.

WICHITA, KS —There will be appearances by Kansas City Chiefs players at the Wichita Force’s home opener. Thus far, Chris Jones and Dustin Colquitt have both been confirmed to be in attendance at the game on Saturday, March 30 against the Texas Revolution. Kickoff is at 7:05 p.m.